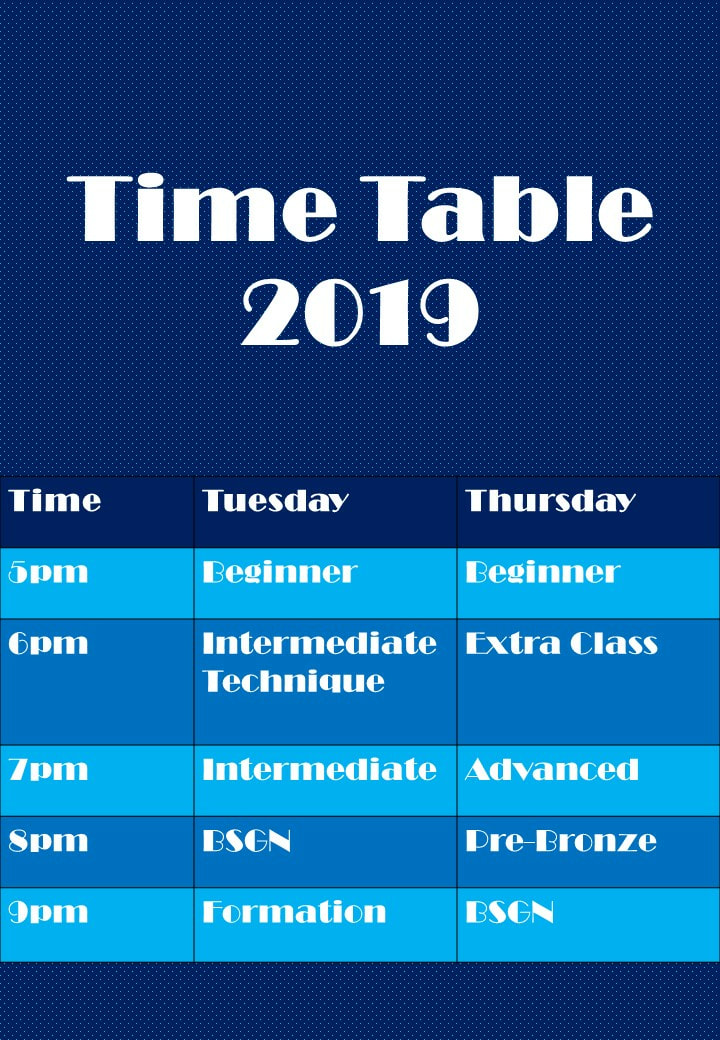 ​UCT Ballroom and Latin Dancing Society is a student oriented (no new members over 30), social dancing society, offering lessons, dance socials and other events to the UCT community. We believe that anyone can learn to dance – even if you think you have two left feet. Our Beginner class will guide you through the basics and help you find your rhythm!
All skill levels
Lessons range from Beginner Level to Pre-Bronze and beyond, so there are plenty of options – whether or not you have danced before. You don’t need a partner to join – we swap partners often, which means that you’ll get to meet, and learn to dance with, a variety of people – a useful social skill.
Lots of classes
Regular classes cover both Ballroom and Latin dances, such as the Waltz, Foxtrot, Cha-cha and Jive. In the extra session we learn Salsa, Viennese Waltz, Argentine Tango and more!
Social society
In addition to lessons, members get regular opportunities to dance in a fun, relaxed environment at our fortnightly socials. These are a great place to try out your skills and get to know other members.
Competitive aspect
During the year we also participate in a friendly Intervarsity Competition with universities from around the country, and in the fourth term we host a spectacular formal dance. Stepping out onto the floor in a ballroom where everyone knows how to Waltz, Foxtrot and Quickstep is an experience not to be missed!


Classes are held in Molly Blackburn Hall (in front of Frigo Café) on Tuesdays and Thursdays from 5pm.
No partner and no dancing shoes required!
See you on the dance floor!

Conceived in the late 80s and active since 1988/89, UCT Ballroom was started by a dedicated group of students who wanted to create a community of social dancers. With the help of Maureen Shargey, who has been involved in the running and coaching of UCT Ballroom since its inception, the club grew tremendously and doubled its membership in its second year and again in its third.

Maureen has been teaching Ballroom and Latin dancing in Cape Town for close to 48 years, ‘helping people with two left feet to make one right’. Maureen officially retired as head coach at UCT Ballroom in 2007 and left the society’s coaching in the very capable hands of IlianaIanovska, Bulgarian champion, coach and adjudicator who has been involved in the society since 2003. Maureen retired completely at the end of last year. Previous UCT Ballroom committee member and owner of the John Hamman School of Ballroom Dance, John Hamman, has stepped in to take Maureen’s classes.

While the actual dance teaching is done by Iliana and John, the organization of the society isdone by the committee. The 2017 committee is UCT Ballroom’s 30th committee and the society would not exist without the time and dedication of these very special people. They are assisted by a variety of subcommittees. More help is always appreciated and makes the UCT Ballroom experience that much more rewarding – so get involved as soon as you can!

In 1992, we started doing Medal Tests, with 92 dancers being tested in the first year. We have offered Medal Tests every consecutive year since then and have recently enabled our senior dancers to do SADTA tests. All Medal Tests are adjudicated by accredited adjudicators or our own coaches and they have proved exceptionally helpful for the technique and confidence-building of the dancers. Due to society finances, Medal Tests used to define which dancers would be allowed to go to Intervarsity to represent UCT. The society has workedexceptionally hard over the years so that we can subsidize every event that our members attend, usually paying for half of the costs of Intervarsity for each dancer, so that whoever wants to represent UCT on the dance floor has the opportunity to do so.

Later in 1992, we also entered our first ever Intervarsity Competition hosted by Wits where only UCT and Wits competed. Over the years, the number of participating tertiary institutions has fluctuated due to changes of clubs from social to competitive. UCT, Maties, TUKS, NMMU, Wits and Rhodes are now the main body of competing institutions, with UCT and Maties having the largest number of competitors in recent years. We have won the competition 17 out of 25 times – help us win again!

We’ve always celebrated the year’s successes with an elegant Formal Ball. Our first
Viennese Ball, as it was then called, was held in Jameson Hall in 1988 with 100 guests. The Balls remained Viennese-themed and in Jameson Hall for many years after that. The Viennese Balls had a massive Viennese flag suspended from the ceiling, people in traditional Austrian dress and guests were escorted to the Jammie Hall steps by horse and carriage. We slowly moved away from the Viennese theme. Other themes were The Emperor’s Palace (Chinese theme in 2009), Midnight and Moonshine (1920s speakeasy theme in 2013), A Night in India (2011), Phantom of the Opera (2006) and the Hogwarts Yule Ball (2016).

Socials have also changed and evolved over the years, starting with only two per year and now fortnightly during term time, increasing our dancing time (and fun) immensely. We also dance throughout the winter and summer vacations, only stopping for 2 weeks over the festive season (that’s 50 weeks of dancing per year!). Many members of our society participate in extra-curricular dancing activities, such as sokkies in the Northern Suburbs, Salsa and Lindy Hop sessions, so there is no limit to the amount of dancing that you can do!

UCT Ballroom has always moved with the times. In 1994, our first edition of On the
Ball was produced – UCT Ballroom’s annual magazine which tells you everything that you need to know about the society and its events for the coming year (this is the 23rd edition – the thing you’re reading now!). As the Internet evolved, so did we and we went through a series of websites. We communicate with our members via email, Facebook (like us!) and Twitter (follow us!) and we have our own YouTube Channel (subscribe!).

In 2013 we began a new event – the Showcase of Ballroom and Latin Dancing. The 2013 committee came up with the idea to provide dancers with a platform where they could showcase what they have learnt throughout the year for friends and family members in a fun and professional way. The first showcase, Vaudeville Circus (2013), was a resounding success and so the showcase has become an annual tradition. The showcase usually runs for one or two nights to a sold out audience. Themes to date include the Silverscreen Showcase (movies theme 2014), Around the World in 80 Minutes (2015) and Dancing through the Decades (2016).

UCT Ballroom is a society rich in tradition, sharing the love of social dance within the UCT community – be part of our family!